Home » Entertainment » Dive into the Music of Mary Poppins Returns

One of the main reasons we all love Mary Poppins is the catchy tunes that you can’t get out of your head. It’s no surprise that Mary Poppins Returns is the same. We sat down with songwriters Marc Shaiman and Scott Wittman to hear about the process of creating this amazing soundtrack.

Mary Poppins Returns is filled with songs that you’ll be humming for weeks after you’ve seen the movie. Trip a Little Fantastic, and The Cover is Not the Book are two of my favorites. I’ve been streaming the soundtrack every day. In fact, I’m listening to it as I type this post. 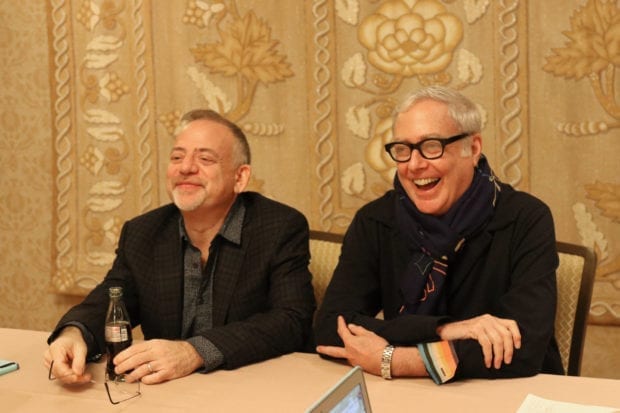 Shaiman and Wittman both gushed about getting to spend time with Richard M. Sherman (original Mary Poppins songs) and ask him about writing songs for some of the classics and working with Walt Disney. So excited that they don’t even remember his answers.

Marc Shaiman – “But the glorious part of it was that he loved our movies so much. And that he really felt like it was in good hands. And that in some way, he said to us that, the baton had been passed.

Have you stayed true to the original, in terms of music?

Scott Wittman – “Well, I think that we went back to the books. And there were so many more adventures in all the stories. And so some of them just cried out to be sung. Lin said it great. He said, ‘You know what’s great about it, is our movie rhymes with the first movie.’

The first movie was like our teacher. Was our parents. So you grow up with that, there’s going to be something about what we wrote that would come from that. You can’t try to copy, or even write something that’s so close, that it will only make us pale in comparison. And yet we couldn’t help but find ourselves in the Mary Poppins vernacular.

Emily’s take on it is so singular to her. So that also freed us up to – she just came in with such confidence and wit. And so it was easy to kind of fit these pieces on.

The process of writing songs for a musical

It’s interesting to hear about the process of writing songs for a musical film. The songwriters have to sit down with the writer, director, and producer to find a direction. Mary Poppins Returns is centered around Michael Banks, a recent widower. Shaiman explains that they piece the movie together scene by scene and decide where to place songs that would further what was going on in that scene or move the story along further. It’s at that point that they go in and start to write the songs. They admit to just sitting around singing and being paralyzed with fear.

Did any songs get cut?

SW – “It was interesting, with Richard Sherman, because in the first movie, they had musicalized a sequence that got cut. And we tried to musicalize the same sequence. And it got cut.”

MS – “It was about, when Mary Poppins’ birthday falls on a full moon, the animals in the zoo become the spectators and the humans are in the cages. So we wrote a song called, The Anthropomorphic Zoo. (They start to sing the song together) And the Sherman brothers wrote a song called The Chimpanzoo.”

You’ve done such a wide variety of work. How was making Mary Poppins Returns – different from what you’ve done before?

SW – “A Disney way, it really was a dream, it’s a wish your heart makes. That was sort of a magical experience. Because Rob is such a person of the theater. And we come from the theater. So that’s really what we – it was like working on a Broadway musical.”

MS – “Rob is singular in his vision, and he’s straightforward – and the blinders are up. And so you do feel kind – it gives you confidence.

Rob specifically hired us also because he knew I also score films. It’s a whole different kind of beast. Or muscle, to exercise. Melodies for the songs could hopefully form a solid score. And not just sort of like a wisp of a melody here or there. But really, of real foundation.

And luckily, Scott after we wrote, Can You Image That which was our fourth attempt at that, to write for that slot. Because we kept writing songs and were like, ‘that’s great, but remember, it’s the first time Mary Poppins has sung on screen in 54 years.’ So we go back, and we write another song. And after we wrote that one, Scott said, ‘Now remember, play it like score, also.’ So besides singing it, a la Mary Poppins. And I sat down and played it. And that’s what you hear as the main theme of the movie almost throughout. That more melancholy – if you slow it down and put slightly different chords to it, it creates a whole other atmosphere.”

What was the most challenging song to write?

A lot of the songs has many versions to them making them all quite challenging. Sometimes to the point of getting to rehearsal and having Emily Blunt up on wires trying to sing it and not feeling it and it getting cut. Rob said once, “You know what, we love the song, and yet when we say the title, we don’t sing it.”

MS – “It’s a lot of pressure. And also with the first song, they kept saying, ‘We gotta deliver Lin-Manuel. We have to deliver Lin-Manuel.’ Sort of felt like a midwife. So the first song we wrote, is the one that’s in the movie. But it’s very gentle. At one point, Rob said there should be no music until Mary Poppins arrives. No songs. But we felt that Lin’s character, although he’s not magical, he can’t create the magic, he believes it. He’s a believer. So we thought we would sing.

So we wrote a second song, with a little bit more energy. And then a third song. And by the time we were in England, rehearsing, we were still writing. And we wrote the fifth song, and it was fun, and I enjoyed singing it. And then, Emily Blunt was coming down the hallway. And she said, ‘What is that, what’s going on?’ We said, ‘Come in, we’ll sing you this latest song.’ And she like, ‘Hmmmmm.’

It’s amazing to think that every song you will hear in Mary Poppins Returns, there are three or more songs that could have been in their place. That is a lot of material. Music that lends itself to telling a story and giving the viewer something they need. Shaiman and Wittman talk about how they write for the performers and keeping with the theme of the movie. One thing that I love is that you don’t hear the original song lyrics and only bits of the score include the original songs. Rob Marshall strategically placed that at the end of the movie as a sort of pay off for the true fans.

MS – “It was nice to not go too high. So that she wouldn’t be so compared to Julie Andrews. It’s nice that her voice sits in a slightly different place than Julie Andrews’. And that would be another reason why sometimes people ask, Are the original songs sung in the movie?  But it would be unfair to performers to ask them to actually sing a song that Julie Andrews sang, or that Dick Van Dyke sang.

Were there any other characters you wrote for?

Wittman tells us that Ben Whishaw was auditioning for the part and while he has never sung before, he sang Feed the Birds, and they wanted to give him the part on the spot. So they wrote that touching song for him.

MS – “A little personal note, we have a friend who had lost his wife. And he told us, he wrote about it. And he would say that, when everyone was gone, he would walk around – that she was still, he would converse with her still every night. About the day. But then every now and then, he would say, ‘Man, where did you go?’  So we asked for his blessing. ‘Cause he also has three kids. And just lost his wife. So we asked for his blessing to music that part of his life that’s very special. And if we could use that in this. So that’s why the song ends that way.”

And now everyone in the room is crying all over again.

MS – I’m sorry to end this on that note, but it is Disney! You gotta kill the mom!  I’m surprised they allowed you to be here!

I’ll leave you with some songs from Mary Poppins Returns 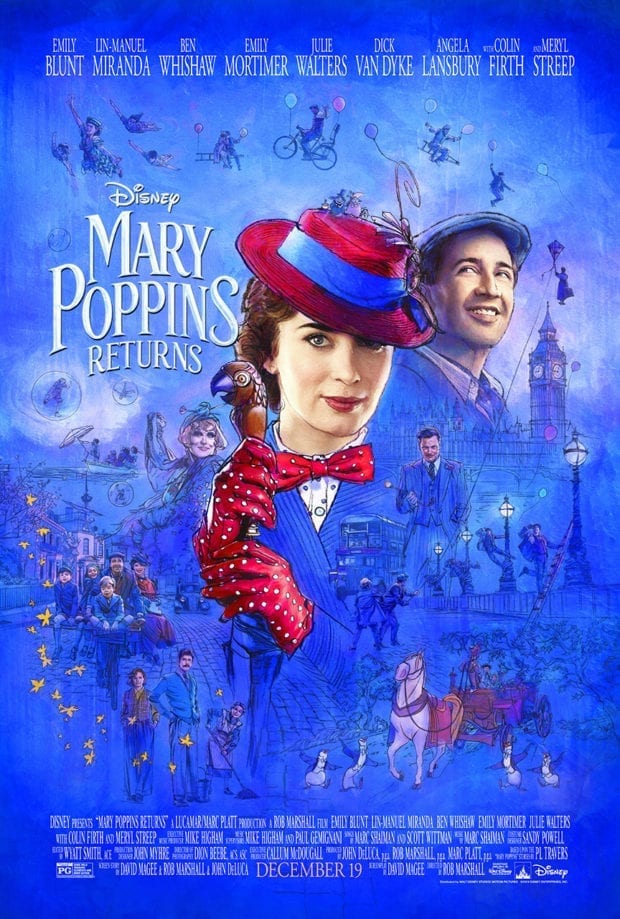 Get the Mary Poppins Returns soundtrack!